Ready for an outing at sea with Top Charter? First choose your location. Located on the beautiful Gulf of Saint-Tropez, our agency offers different locations depending on your preference.

Where to board in Saint Tropez?

Saint Tropez is a popular seaside town, not only with tourists from all over the world but also with boaters. Its central location on the Mediterranean easily allows for trips to the famous Golden Islands of Hyères or east, to the Monegasque coast, Nice or Cannes.

The Saint-Tropez marina welcomes magnificent boats, yachts and sailboats all year long and we can arrange for you to board from this mythical harbour on the Côte d'Azur.

If you have rented a boat with a skipper or crew, you can board at the area shown in the picture.

A historic harbour on the Var coast, the Saint Maxime marina has been shinning on the Mediterranean since the eighteenth century. Located in the city’s center, the harbour can accommodate boats from 5 to 25 meters on 800 rings.
Labeled as a “Clean Harbour” the marina contributes to preserving the maritime environment. Only 15 minutes from our agency, you can embark from the harbour in Saint Maxime. 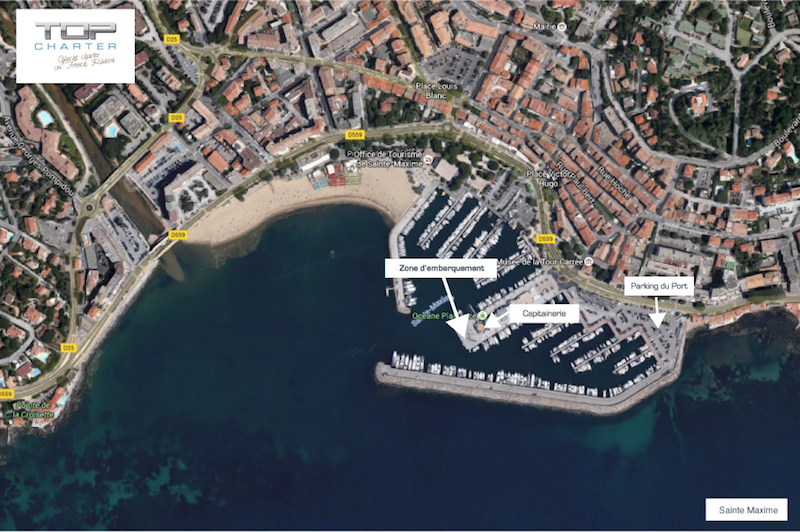 Where is the Top Charter Agency in Port Grimaud (83)?

If you have chosen to rent a boat without a skipper, you must embark from our headquarters in Port Grimaud in the Var. We are fortunate to be located in the heart of the Gulf of Saint Tropez in "Provençal Venice”. Listed in 2002 as Patrimony of the 20th century, Port Grimaud is an ideal location for sailing in the Mediterranean.

See our exact location in Port Grimaud South on the map below.

Book my rental NOW
X
USE OF COOKIES
By continuing your visit to this website, you accept the use of cookies to offer services and offers tailored to your interests.
More / Accept